Welcome to another deconstruction post, with a look at where we’re going. Maybe it will also make you feel better about your own statistics.

May 2017 was, as I once said, a statistical anomaly. Tartra wrote me a review on Web Fiction Guide early in the month, Rev Fitz reviewed the site mid-May, and late in the month I had a guest post at Drew Hayes’ site. Since then, we’ve been on a decline.

Caveats: There’s been only 35 new posts over the past year, after I shifted to posting every two weeks, following rather disheartening voting results in July 2017. (Viewership also declined when I started posting more frequently though, so who knows.) In addition, the entries haven’t been for “Time & Tied”, as that serial concluded at the end of May 2017. “Epsilon Delta” ran from June to December 2017, then “Virga Mysteries” took us from January 2018 to June.

The weakest performer of “Epsilon Delta” was Part 15, with 15 views. (Others earlier on reached 17 views – some even more than 30.) “Virga Mysteries” has had a cooler reception, only 10 people reaching the end of Case One, and only 4 people starting Case Three last month. And before you say it hasn’t been around as long, the latest views were the day of publishing, and no one’s looked at “Epsilon Delta” in 2018 (the “fave character” poll sits at 4 votes), so time doesn’t seem to be a factor. You either see me the week I publish, or never.

Rev Fitz has reminded me of people who have subscribed, and don’t visit the website. I do have 18 “followers” and 2 “email followers”, whatever that means. (I’m also constantly spammed by @outlook emails claiming someone’s followed my blog. Why do more spammers visit my page than actual people? I get 20 spam comments per week. Oh well.) So there may be something to those invisible readers.

In an attempt to find some silver lining, this HAS restored decimal progress to my two week statistics snapshots. You may recall these appeared back during the climax of “Time & Tied” Book 2, in November 2015. It a funny quirk I’ve been able to track. You can manage 10.0 if you have an 8 or 9 view day; as soon as you get 10, the scale jumps away from decimals. 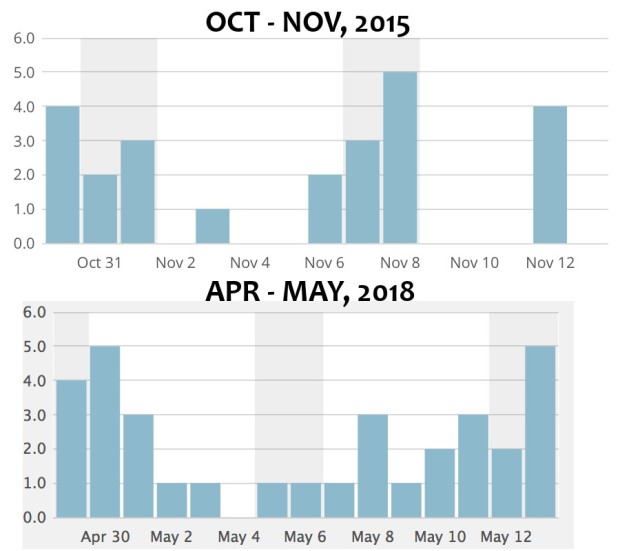 TWO AND A HALF YEARS LATER…

Now, I should conclude this section by pointing out that I haven’t done much in the way of outside publicity this year. I’ve been pretty busy (see below). I did participate in the WFG “April Fool” swap again (I fear Rev Fitz isn’t building much traffic from me), “Serial Fiction Digest” gave me a feature shoutout at the end of March (before apparently going under), and I still get high referrers (ie- 5 per month) from Top Web Fiction, The Chaos Beast, and Redwood Crossing. So maybe that… kept things from being worse?

As I said, I’ve been pretty busy – me and my wife are expecting our first child later this month. Melissa’s been queued up to run no matter what. My plan is still to return to “Epsilon” after (I’ll be putting my webcomic on hiatus to ensure I have time)… assuming I, you know, get votes for it. If no one cares, well, I don’t know. Look for a post late in the month starting that off.

I also hope to poke around more with “Time Untied” – yes, it really is still a thing, the 40k+ words from November have been revisited a few times since, and I still know what I want to do with it. It’s only that the first big Carrie-Heather scene has kind of blocked me, not to mention the stress of the teaching job constantly pulling me away.

In the meantime, I’ve contributed monthly comic columns to “The Time Travel Nexus” and participate in weekly webcomic chats on Discord, so you can find me there. Oh, and no 2018 coins yet this year. Interesting. I’m guessing I’ll start to see them soon?

As always, I hope you enjoyed the read. Feel free to add your voice below about anything you were wondering about, how much better/worse your site is doing, or just to offer encouragement. I’ll leave you with this AMV of a time travel/pop culture mix that you didn’t know you needed. (It makes more sense if you’ve seen the anime.)