PREVIOUSLY: A fifty-year old Carrie has abducted her teenaged self. Characters have pursued her from their past… to the uncertain future.

PART 88b: A FUTURE DARKLY

Elder Carrie bit her lower lip in amusement as the Temporal in front of her was fidgeting in his seat. It was clear that Glen was nervous, his body language was broadcasting it aggressively. Elder Carrie took a moment to appreciate that, this was not a side of Glen that she had seen often, but it had confirmed the change of roles in their relationship: Carrie was in control. Carrie was in charge. The best part of this is that Glen knew he was in trouble.

Elder Carrie locked eyes with Glen as she removed her coat, without blinking she hung it on her new “coat rack” and watched as Glen flinched.

“Is this making you uncomfortable?” Elder Carrie asked, motioning to the “coat rack”.

“I don’t think it is tasteful,” Glen responded, avoiding further eye contact. “I think it’s a little cruel,” he continued.

“Cruel?” replied the Elder Carrie. “Coming from YOU that’s a laugh. Cruel was you changing my childhood, cruel was you letting my past self know about about my sibling prematurely!” Her voice cracked with emotion. “What is ‘cruel’, Glinephanis, is that we got here because I trusted you, and you proved to be incompetent.”

An awkward silence fell on the two time travelers. As Glen looked down on the floor in guilt, abandoning his usual confidant demeanor, Elder Carrie poured herself another glass of wine and let her arm fall on the “coat rack” showily. She let the rack hold her weight and leaned on it as she swirled the wine in her glass playfully.

“This,” she said motioning to the “coat rack” once again, “is nothing compared to the trouble you have put me in.”

Glen could no longer avoid her gaze and finally yielded. He gazed up to see that right next to the mirthful and half drunk smile of Elder Carrie was the horrified and painful face of her younger counterpart. Carrie Waterson, the young Carrie Waterson, was frozen in place, trapped in time by her future self. The once powerful, albeit naive teen was powerless in the face of an older version of herself that had both more experience, and better control of her powers. She was now frozen in place, being forced to act as a makeshift coat rack. Glen could see the plea in her eyes.

“It is still pretty distasteful,” the Temporal finally managed. “How much longer are we going to have to keep her like this?”

The Elder Carrie stopped swirling her wine and looked at her younger self contemplatively. In a swift motion she grabbed a hat off of the sofa Glen was sitting on and rested it on the younger Carrie’s outreached hand, then took a step back and admired her work. “I’m not sure,” she replied, “call me an egotist but I am growing quite fond of myself as a coat rack.” The Elder Carrie took a sip of wine. “I really do just tie the room together.”

The Elder Carrie was taken aback now as the tone in Glen’s voice changed to annoyance. “I think you have misunderstood me, when I said it was not tasteful or cruel I was not talking about her treatment…”

“Go on”, said the Elder Carrie.

“I was talking about her style. The airport uniform she is wearing, it just does not go properly with the drapes,” continued Glen.

The Elder Carrie had not expected this, and was earnestly offended by Glen’s assault on her interior decorating skills. “What are you talking about?!” she snarled.

“The drapes Carrie, they clash with her navy blue, black and yellow vertical stripes just do not mesh well, either change her clothes or change the drapes.”

“Do you have any idea how hard it is to change the clothing of someone frozen this stiff?!” The Elder Carrie countered.

“Fine, then change the drapes, I said you could do one or the other!” Glen retorted.

She winced. “No. NO! I stand by those drapes, they are little unconventional–”

“A little unconventional?” Glen interrupted “They have black and yellow vertical stripes, Carrie! You might as well have lined your living room with ‘caution tape’ because that’s what it looks like!” The Temporal was out of breath.

She finished her glass of wine in protest and pointed at the drapes in fury. “They were CHEAP Glen, I am not spending a fortune on something that just blocks out light!”

“Well that’s the problem, isn’t it Carrie? Everything has got to be cheap with you! You can’t spend the extra money to get some drapes that aren’t an eyesore and you can’t even spend some money on a real coat rack. A coat rack left out on the street would be a better option if you are being so frugal!”

“WHAT?!” she screamed, “and get bed bugs? You know how dangerous discarded furniture is, Glen! At least I know where this one has been.”

In her fury, Elder Carrie lost concentration on her younger counterpart, giving her just a moment to plea, “Help me Glen please!” before being frozen back into place.

“Stay out of this,” The Elder Carrie sneered.

Glen looked on Carrie with exasperation and said: “Thank you, she wasn’t even contributing to the conversation!”

“I know right?” replied The Elder Carrie. “She just rudely interrupted us without saying a thing about the drapes!”

Glen frowned. “Why do we fight like this? It’s just furniture.”

“I don’t know, Glinephanis,” Elder Carrie sighed. “I guess the drapes are really not all that important. I’m sorry. We can replace them with the bright red ones with the paisleys you liked.”

“Those paisleys are going to clash too,” said Glen with his arms crossed.

“WILL NOTHING PLEASE YOU?!” the Elder Carrie shouted.

A single solitary tear ran down the frozen Carrie’s eye.

The Elder Carrie opened her mouth as if to say something when she was suddenly hit with an epiphany. Running over to the nearest lamp, the Elder Carrie removed the lamp shade and placed in on her younger self’s head, obscuring her tears and horrified expression. “What do you think Glen?” she asked.

“Yeah,” Glen said positively. “Yeah! I think that works! She is much better looking as a lamp, plus that black lamp shade actually goes well with the drapes!”

“And you doubted my sense of décor!” the Elder Carrie said playfully. Glen smiled back at her and poured a glass of wine for himself and for Elder Carrie. They clinked their glasses together as the tension between them softened. “You know,” said Glen, “if you can keep her like this I can glue a light fixture to her head and then she would be a functioning lamp.”

“There is no need Glen, my past self was always pretty bright…” 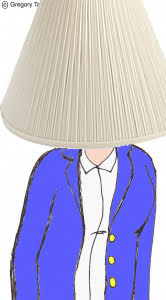 The tale you’ve just read is actually part of the Serial Fiction April Fool’s Day Swap, 2017 Edition. This non-canon post (and the modified image) was created by Michael F (aka rev. fitz), who normally writes the story “Existential Terror and Breakfast”. (“A web serial with cereal”) Go check his site out! There’s a bunch of stuff there.

For a full list of all six April Fool’s Swappers and their stories, as well as dozens of other serial novels that you might enjoy, check out the Web Fiction Guide Forums.

Thanks for reading, and remember, the best way to support your favourite serial novelist is to tell all your friends about them!

NEXT: The *real* 88b, “Future Imperfect”, posts TOMORROW. Then a Commentary Post on Monday!

ASIDE: Hope you enjoyed reading this post as much as I did. With no prompting, Michael actually nailed some elements of Future Carrie’s personality pretty well… I’ll leave it to you to decide which ones, as before we officially meet the older Carrie again, we’ll get some future context. Oh, care to vote for T&T at TWF?