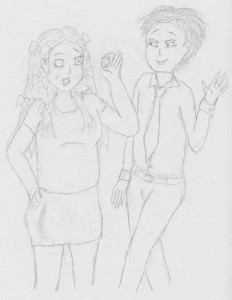 1. Original Date Of Completion: OCTOBER 30, 2006
2. What I Was Doing: Part-Time Contract Teacher in Ottawa
3. Changes of note:
-Almost everything with Chartreuse was new
-Working out where Carrie was going, bumped back into this part

Back in Commentary 1, I remarked on how the earliest text file I had was from December 1999 – and that’s not when the story idea started, only the electronic writing. At this point in the narrative, we’re in March of 2008. Meaning at least eight years after starting to write. Did I have this whole plot in mind way back at the start? Oh, heck no. I tracked plot points, leaving myself useful threads as I went. That’s my style; probably part of the reason I’m good at serial writing.

“TimelineUsed” was the last such text file I left behind, dated Dec 10, 2006. It got a lot more in depth than previous versions, by flagging more obscure names like Tracy Irving (Corry’s contact in England who knew Julie), by inserting Carrie’s departure from the present (then “Late May 2002”) and by pinning down Mindy’s identity (more on that in spoilers below, in case you didn’t catch that key part).

Despite the detail, eight years later, I was still trying to decide where to take things. And the writing was slowing down. Initially, I’d envisioned a five season (10 book) epic. By 2008, I wasn’t even sure if I’d get season two finished. Except I couldn’t set it aside completely, because I wanted people to read it, and I asked myself, who would read an unfinished story? That’s where I was at, mentally.

Then, in August of 2009, I saw “The Time Traveler’s Wife” when it first came out in theatres. (Which is rare, normally I give movies a few weeks.) That energized me enough to work through the remaining five episodes from this point forwards (which, after edits, will become 13 parts, not the usual 10). Ergo, before we continue into those final two arcs, let’s look at stats, and wrap up the Mindylenopia connection.

Bad news first. After an unexpected upswing in December 2016 (largely thanks to Mez and Tartra reading the archive), we’re sliding back down. January saw 464 page views, and we’re on track to inch up to 360 page views by the end of February. Which, admittedly, isn’t as low as it got in November of 2016 (220 views). But I still have multiple days with only two views. Hey, it’s not zero? 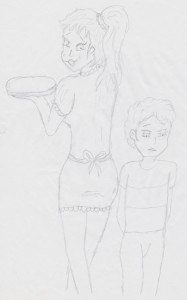 Individually, only 7 people have seen Part 80 (“Vanishing Act”), posted back at the end of January. As Lightdefender has reminded me, by following the RSS feed, no page view would register… but I think it’s clear this story is gaining zero traction. The last time anyone looked at the start of Book 2 (“Missing Piece”) was back on Feb 4th, and a view for the start of Book 3 (“Talking to Herself”) requires tracking back even further.

The frustrating thing is that I know there’s interest in time travel out there. The TV show “Timeless” wrapped up it’s first season last Monday, and I was live tweeting along with tons of other people. There’s a new comedy time travel show, “Making History”, coming out in March. The movie “Arrival”, which has time travel as a theme, was nominated for Best Picture at the Oscars. Why can’t I tap into this?! I’ve given two interviews in two months (a local author’s site, and a serial page on Facebook) and it hasn’t seemed to help at all. Is my story that bad?

Now the good news. In the past week, Paul Wandason has approached me about writing a guest post on his time travel blog. (“Time2TimeTravel”, find it there.) It could help, and has added a “like” to my Facebook page, bringing us to 15. I also have eleven blog followers, up two from 2016 – hello to sweetmotivational and cuteanimallove. John Golden commented this month. And I am still getting mentions out there: k-fish of Redwood Crossing offered an unsolicited plug back in December (that I only recently saw, oops) and Scott Delahunt posts me regularly to Facebook.

I have also, as of Feb 23rd, started posting Time & Tied on the site Royal Road Legends. (The turnaround for approval was surprisingly quick, a little over 24 hours.) I’ve reformatted Book 1 to split all parts in two, the way I’m posting now. I fixed my possessives (I hope), cut back on my overuse of exclamation points, and made a few other minor changes. The plan is to post there daily for the next half a year. (Yes, this tale is over 183 half-parts.) We’ll see how that goes. If you have any pull over there, maybe give a ranking? If not, it’s cool, thank you for simply sticking with me.

Incidentally, it’s worth noting that some of the early parts, previously published on this very site, have been edited as of the week of February 5th, 2017. (The Facebook banner was also updated then.) Notably Chapter 1, streamlined to have some better grammar, and Chapter 11, to include a brief appearance by Theresa. Honestly, I’d thought she was already there, alongside the first cafe reference. Somehow, I’d made a mental edit in my head. It doesn’t really make a difference, although Theresa has become a relevant character in the midst of Book 4. Speaking of…

At what point did the Mindylenopia/Theresa plot point come together? From the point of her banishment, I had it in mind that Mindy went back less than 20 years, and that she would be mixed up with Linquist, driving his alien vendetta (first seen in the abduction of Luci). The subsequent “Timeline” file, from before the start of Book 4, further postulated that Theresa was Mindy’s mother, while making it clear that Mindy was behind Julie’s reconstruction efforts. The “TimelineUsed” file (mentioned above) finally melded Theresa and Mindy – they were the same person.

As to foreshadowing? The cafe fire to start Book 3 was a happy accident (I forget why I’d decided not to have Theresa there), the couple lines of dialogue to Clarke post-Banishment were done in recent edits, and there’s one other much older Theresa item you may have forgotten about, which will help steer the narrative later. This is also why I know these random sketches I’ve been including in recent Commentary were done after 2005, given the presence of Theresa (above, with Tim).

Regarding the overall time travel plot elements, lots of the rest was originally there, but got shifted around. Carrie’s blowout with Glen was originally in Part 80 (day of the talent show). It was moved back to Part 78, which made space for the new Chartreuse romance (the classroom scene). Carrie’s letter to her father appears earlier now; it wasn’t revealed in the original until Luci read it aloud during the group discussion. Even then, they didn’t realize Carrie’s destination (her mom) until Laurie helped Frank connect the dots in the second discussion (the one after Glen and Mindy bickered).

The group also didn’t discuss Frank’s death until that second meeting. They couldn’t do it any earlier, because in that first draft, only Glen knew the truth. By picking up the dropped ball of the Carrie-Chartreuse romance in edits, I’d realized Chartreuse could be the vehicle to tell the group about Carrie’s Timelines, which made a lot more sense than Glen doing it. The tradeoff for Chartreuse’s torment was that she also got a surprise make out scene with Carrie.

I’m serious there – their kissing scene was new, yet felt necessary, and I thought that was everything. So I was just as surprised as Glen when Chartreuse blurted out Carrie’s love admission, then had her cry-fest extra-love confession with Laurie. Um, you go girl?

Back on the topic of changes, another shift was the talk of Future Carrie. Originally placed during Mindy’s technical talk, now bumped back to the day before (in that second talk, after the Glen/Mindy bickering). And all of the temporal theory talk (about burning dinner) was new. To be clear, the “one timeline” temporal thread in that talk was always the intention for this universe, but there was never any actual discussion of it in-story… and Frank’s question of Shady/Glen/Mindy affecting the timeline in different ways WAS valid. Wasn’t it? So we finally got an in-story explanation of time travel in Part 83. I hope it made sense.

Was anything else baked into original plans? Yup. The Venitis being in Miami, which is where Elaine disappeared. Planned since Book 2 or before. Hence why I twisted Corry’s ankle earlier – he’d taken Laurie’s place last time (saving Julie), but I wanted his sister on this trip. And Beth’s return from the 1950s was always planned in some way too. I mean, I gave her a hairband with a tracking device, for goodness sakes! Though I hadn’t known then that this was where I would use her.

So, at this point we HAVE been in Timeline Four since Book 1, Chapter 1 (as Chartreuse deduced). Even though the cause for it was in Book 3 (Mindylenopia). And if Carrie seemed a bit abrasive in Book 1, she has this whole dual protagonist/antagonist thing going for her. Antagonist of Timeline Three, Protagonist of Timeline Four. And yes, Future Carrie of Timeline Three IS a legit threat, as I had always intended for her to face off against herself somehow. Oh yes, we’re going there.

But first, we’ll see more Beth, who I had always intended to make more religious, due to Carrie’s “angels” assertion. Beth now has to deal with school – and someone else, who became religious while I did my edits. Know who I’m talking about? We are now halfway through Book 4, and heading back into a bit more character work. I hope you continue to enjoy.

Parts 80/81 were originally “Vanishing Act”, so that was Part 80a. Parts 82/83 were originally “History Lesson”, but uh-oh, I used that for the second part of “Flashback” way back at Part 28. So I went with “Remaking History” as Part 82a instead. (Weird that both parts use ‘8’ and ‘2’.) Remember you can VOTE for T&T at “Top Web Fiction” on a weekly basis to help spread the word. It helps.

Coming This Tuesday: Laurie’s out, Beth’s in.