The timeline and character tracking files started to become really important around this point. Why? Well, the prior commentary showcased episodes completed in 2004. As you see above, the next entry was done in 2005. The next, 2006. Fun fact, teaching doesn’t leave you with a lot of time to write, hence the “September” completion dates. And while I have a pretty good memory, details could easily slip through the cracks (like the Chartreuse-Carrie romance angle, restored in edits and the new Part 75).

“Timeline”, a file from Oct 23, 2004, was the file where I stored key events that had occurred – or would occur – in the story. This file was an update from the “TimelineA” file (referenced in Commentary 21). That new file adds in when Luci moved to town, elements of Mindylenopia in the present, and a bunch of future stuff is clarified – the file no longer ends with Glen going back in “Mid 2013”, that event is now “Mid 2027” (despite main events still occurring in 2001). There’s more, like 2025 being the construction of the first time machines, but that starts to tread on spoiler territory; we’ll revisit this at the next file update.

“TimeCha5”, my character file (also referenced in Commentary 21) is a version from Aug 25, 2006. Bizarrely enough, the only update I can see from TimeCha4 (in 2003) involves the insertion of Luci’s middle name (Isabella) – it doesn’t even mention Megan. That’s the last update I would make to this set of files until 2014, effectively present-day. Sidebar though, last time I mentioned my inability to give characters last names… Megan’s name was originally “Megan Fallows”. (Megan Follows, anyone?) That was shortened to “Falls” in edits for the blog.

A few other files of note: An HTML file from October 30, 2006, linking to all the episodes thus far. It also included the titles for the next three episodes, implying I knew where I was going, mostly. Coupled with that was the image of a crystal swan I got off the internet (dated Jan 22, 2005). These were linked to off my personal Sympatico website at the time, so maybe old versions of “Time Trippers” still exist in web archives (the site was http://www3.sympatico.ca/gbtaylor1/tt.htm). And then there’s the last of my Comments Files, which are dated Sep 24, 2006 and Oct 10, 2006 respectively.

Scott Delahunt and I have a history that dates back to before this story. Back in the late 1990s, we would comment back and forth on our fan fictions and other works – eventually including “TT”. Starting in 2000, I kept many of those emails, for his thoughts on Episodes 2-5, 9-13, 15, 16, and 18. (Recall each “episode” is two parts, so those cover through to the middle of Book 2.) I obviously wasn’t careful about archiving, hence, gaps. In that same directory are these two 2006 files, which are not emails, but IRC (Internet Relay Chat) logs, about Episode 37 (Parts 78-79) and Pre-38 thoughts.

But before we get into IRC, some notes on changes. Spoilers, but only for the above parts, if you’re not caught up. Episode 36 (Parts 76-77) didn’t need much adjustment. Having added the prior Luci/Frank scene in the library, the Luci/Tim scene was less Luci dwelling on her breakup and more wondering about where to go next. Julie also went into a bit more detail about Glen’s mental manipulations – the china cabinet line was new. Yet the arc ended the same way.

I started Part 78 thinking it would be an insert, doing a bit more with the Chartreuse-Carrie dynamic. Then I realized to properly address that, Carrie needed a scene with Glen too. So chunks of their talk from Episode 38 (coming up next) were transplanted, with the specific timeline references being new. The Chartreuse/Megan talent show vision issue, merely informed in the old 37, was then shown “on screen” instead. After which Chartreuse completely took over.

Episode 37 USED to be a Corry-Megan episode. In brief, Corry got Kim to knock Megan out, then they brought her out to the woods. They reset her watch (adding a fake time travel element, so she thinks it’s after the talent show), and then Corry leads Megan on a false chase after Laurie, culminating in the blackmail plot, at the train station. Two problems. First, the fake temporal element creates unnecessary complications (Megan doesn’t buy it), and second, Corry is portrayed as being the “good guy” – in a story where he scares the wits out of a girl, for blackmail purposes. Uhm, yeah, hard sell there.

So, Chartreuse became our new “good guy”, as she endeavoured to understand Megan, rather than deceive her. I went along with it, because: (1) It allowed me to explore Corry’s initial reasons for controlling the school. The whole story with Laurie and Josh smoking was new. (2) It forced ME to understand Megan. Every single religious element was new, and fortunately these rewrites were in time for me to retroactively insert Megan’s cross necklace into Book 3, at her first appearance.

Was ANYTHING kept? Well, Kim still made an appearance. Linquist’s cabin in the woods is in both versions. Ditto Frank’s sonic grenade, Corry dressing up like his sister, and his twisted ankle. Also Chartreuse doing the recording… except in this version, she turns it off, then chases Corry away. As a result, Megan is mollified instead of justifiably LIVID. Oh, Frank also appeared in both, though this time it was for the new scene with Julie, which helps to explain why they’re back on speaking terms in the next entry. Originally, he showed up mainly to collect his grenade, having helped Corry as a favour to Kim.

With all of that in mind, some thoughts from that IRC file on Ep 37: At the time, I’d mused on it being a “filler/setup ep, but it felt needed”. Scott agreed that Megan was a loose end. At that time, I wasn’t certain about revisiting Megan afterwards, barring Season 3 (FYI, she will return). And Scott also correctly pegged why I’d put Corry out of action with his ankle – do you see why? Talk later shifted to Scott’s story of the time, and whether Corry and Rita would get along, so instead of getting into that, let’s now look at how everything threads together. 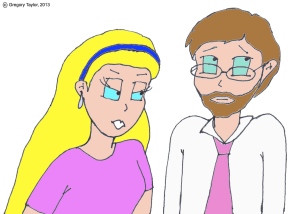 The school plot is mostly wrapped up now. The school politics (between Carrie, Julie and Corry) were largely what carried us through Book 1, back when time travel was experimental. It led to Julie’s school story interweaving with the time travel in Book 2, ultimately taking her out of the picture. But I couldn’t leave Corry in charge for senior year – he would get too much of a swelled head.

In Book 3, as the time travel came more to the forefront, Megan was devised as a rival to both of them. Now, in Book 4, Megan is in charge – but letting the student body do their own thing (more or less). We even got a look at Corry’s school domination origins, to balance Julie’s earlier story. So while there is a bit more Megan to come, hopefully you feel like the overall high school aspect of the story has reached a satisfactory conclusion. Let me know if aspects remain unsatisfying.

Elsewhere, the time travel plot is close to firing on all cylinders. Are we in “timeline five”? What does that even mean? A lot of the earlier parts were instrumental in setting up where we’re headed, though I suspect (hope?) it wasn’t too obvious at the time. And as much as I might want to mention specifics here, it’s better (and more entertaining?) for you to see those things as they come up. It will be gradual.

Turning from plot to characters, originally, Megan was something of a cipher. She merely served her purpose by turning the tables on Corry (and Julie) for once. As I mentioned above, I didn’t delve deeper until these edits, when Chartreuse confronted her. As a result, Megan has now gained more of a personality, and there’s method to her madness. Religion was not an angle I’d expected.

I suppose you could say I’m Christian, in that I had a religious grandmother who gave me a Bible, I once did Sunday school, and I went to church… on special occasions. Yet my parents themselves didn’t insist on anything religious, so for over twenty years now, “Christianity” has idled in my subconscious. As such, lot of web searches were necessary for Part 79, to pull Megan into focus. Is she plausible?

To be clear, adding religion didn’t feel totally out of place, given how the concept of free will is tied to time travel. Consider: Megan baits people, to see what they’ll do. Well, when Carrie told herself to “talk to Chartreuse” to start Book 3 – was there really a choice there? Or was it predestined? However, religion IS edging out of my comfort zone, so don’t be afraid to call me out on inaccuracies, or to offer up some new religious insights.

As far as other characters go, we’ve been seeing more of Tim. Like Megan, aspects of him are also a cipher to me. I know he needs to take over-the-counter medication, and has an occasional stuttering problem, but I’ve never been sure whether those elements connected to something physical or mental. Only that it meant he kept mostly to himself. There’s no revelation coming there; let me know if you have thoughts.

Regardless, Tim is now part of the group, thanks to his connection with Clarke and Julie – Chartreuse’s old “two degrees of separation” (2DEGS) group has again been fully integrated. And a linguist will be helpful – did anyone see the movie “Arrival”, late last year? It’s not really like that, but there’s your precedent for language being used in time travel fiction. As Mez pointed out in a comment for “Bad Signs”, the language in Linquist’s logbook will now be referenced in dialogue using % markers.

Lee has also come more to the forefront, in helping to create the stalemate between Julie and Corry. He’s always been my satellite member of the group. They help him out, he helps them out, but he stays on the fringes… I’m hoping he comes across as the most “average” out of any of them. The “grounding rod”, if you will, a normal guy dealing with otherwise extraordinary situations. Things happen around him, more than they happen to him. Yes/No? What do you think?

I don’t believe there’s much to say about the other characters at this point. Laurie got some extra backstory in Corry’s story… Julie is coming back into the fold… Carrie is dealing with how she is destined to leave town. It will all play out shortly. In fact, after a bit more character work between Chartreuse and Carrie, plot effectively takes over. Also, temporal explanations. Stick around, won’t you?