“Time & Tied” PARTS 67-68
1. Original Date Of Completion: NOVEMBER 24, 2003
2. What I Was Doing: In Ottawa, looking for a teaching job
3. Changes of note:
-Removed an allusion to nudity that felt wrong (given the in-narrative author)

“Time & Tied” PARTS 69-70
1. Original Date Of Completion: JULY 30, 2004
2. What I Was Doing: In Ottawa, after an EOT, looking for a teaching job
3. Changes of note:
-Altered an element of Luci’s backstory (see below)
-Different “split” (commercial break) location for balance with:
-Added Carrie’s mental conversations with herself (“Elizabeth”)
-Added references to various timelines at the end 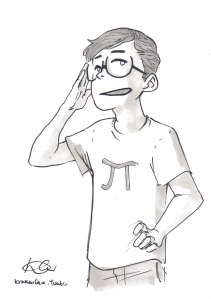 Stats! For anyone who feels like their website views are horrible, lets see if mine are worse. “Time & Tied” started in April 2015. Here we are *20 MONTHS* later. We just finished T&T Book 3. There’s some fun parallels.

Yet it’s even worse. Not only has the site again plummeted to being less hyped during the climax of an arc than the beginning, Book 3 started running *twice-weekly* postings in September. (Including a “Previously” to help occasional readers.) So I have LESS hits on DOUBLE the posts! In fact, when Book 1 ended there were only 85 posts garnering those 91 views in a month. Now there are 176 posts garnering 190* views this month (projected). [*Final total: 220 views.]

Here’s how stats have looked on a weekly basis; the week before Sept 12 was when I shifted to TWO posts per week (can you tell??):

Isn’t that worse? I feel like that’s worse. Hell, “Shattered Part 2” (from four weeks ago) has ONLY FOUR VIEWS. Only three days out of the last thirty have over 10 page views (across 170+ posts) and only one of those days is over 15. All this despite getting a 3rd T&T WFG review from ChrysKelly in August (and a shoutout in his serial last month!), which was actually quite good. (Bright spot! Also the blog now has 10 followers. Woo!)

Conclusion: Is the “Time & Tied” story THAT boring? Or that inaccessible? Will no one else tell their friends? I know, I know, I waffle back and forth on making peace with my stats (I’m great but I can’t market) and throwing up posts like this (I fail as a writer). I’m not sure where I am now, but hopefully YOU feel better about yourself. Moving on to story analysis.

You might recall that Parts 65-66 were originally completed in April 2004. So the entire “Woodlands” section was written BEFORE those parts (Clarke’s trip around to visit everyone, in the prior commentary). In fact, “Woodlands” came right off Mr. Waterson spotting Mindy’s letter. I changed that here because it’s less like a speed bump now, allowing the prior parts to “arc” together by placing the Mindy fallout after her event, without interruption. Now, “Woodlands” arcs towards the Book’s final climax and denouement instead.

I didn’t remove it entirely, because I thought we needed the mental break before the literal Luci/Frank mental “break”. It also foreshadows Glen’s actions (admittedly right before them, with no Clarke in between). Plus, hey, I wrote it, so why not. “Woodlands” itself was an attempt to recapture the “lightning in a bottle” that was Chartreuse’s story earlier in this Book about Tope Diamond. To that end, I think it fails? But does it still work as a comedy piece? … I hope so? (Does anything work on this site?)

There’s another jumbled order coming up – the start of Book 4 will be better served by swapping the order of the next two episodes, one acting as a better recap of this book’s events. Those will mark the last set of entires completed in 2004. Yes, *four years* of on-and-off writing, and the T&T storyline was getting away from me. I’d started it in University, then completed a year of private school teaching, a year of getting a formal Education degree at Queens, and a year of looking for high school work in Ottawa (and scoring a semester Feb-June 2004).

Speaking of teaching… yeeeah… as originally written? Luci was abused by a teacher, not a next door neighbour. (The “backstory element” I mention above.) Yikes. When I went back and looked at that on later edits, I had a serious WTF moment. I was not only disparaging my own profession, I was possibly making people wonder about me. (Hopefully NOT, I’m also not a misogynist like Julie’s father, but still, I imagine some cannot separate a writer from their works.) Changed at the first opportunity, and that’s the last I’ll say about it.

Something NOT changed was a sneaky hard date in the Woodlands story: Security Breach 08/22/88. That was the date of Carrie’s mother’s disappearance. And thus the date of the second time travel trip (Frank’s first). I didn’t see any other way to make reference to that in Hank’s story, so I simply left the cryptic numbers there… only if you’re reading this now, will you know it’s a reminder that no, I have not forgotten about Elaine Waterson. Hey, if that’s not incentive for Book 4, I don’t know what else is.

Book 3 is now DONE, as is Timeline 3, in a sense. The picture you see above is a sketch I made during the “Woodlands” writing. Laugh at my inability to draw. Let’s now get more into the rest, with spoilers for Books 1-3 only (not the one that’s incoming).

Spoilers for the past are unavoidable, I’m putting a bow on things.

Did we have character arcs this time? Carrie was, of course, coming to terms with her temporal abilities – first through interactions with Chartreuse, then everyone, then Glen, and finally on her own. Hence how I labelled the arcs. I’m not sure how much she grew as a character; in some sense, she’s regressed, closing everyone out again. I hope her motivations make sense. Did you see any growth?

Frank’s arc went from being unsure how to behave in a relationship with Luci to literally giving up his life for her. Luci’s ran in parallel, as she tried to figure out her own emotional well being, while coming to terms with how demons from her past were a hidden influence on her present. Julie’s arc was largely building her back up to the force she’d been in Book 1, following her psychological crash in Book 2. Clarke didn’t really have an arc; one could argue he needs to find himself, he’s so tied to Julie – and now she’s cut him off.

Secondary characters? Well, Chartreuse’s arc was tied to her increased romantic feelings about Carrie. It was cut off by Carrie (but will keep arcing forwards). Corry’s arc involved his hubris and overconfidence, and now that Megan’s in charge, he may need to admit he can’t handle everything he thinks he can. Laurie and Tim didn’t have much of an arc (they’ll get more later). We saw more of Lee’s family, but again not much to him. Glen hasn’t really grown as a character either, he’s largely tied to plot.

We got our first explanation of Timelines 1-4, and that WILL be helpful knowledge in Book 4 (don’t worry, no memorizing, it will be in context). They’re actually something that came out of the re-edits more than the original writing. We also got expansion on the “Future War” that Shady discussed back in Book 2. Glen (Glinephanis) and Mindy (Mindylenopia) are Temporals, in a conflict with the Mundanes. Carrie remains at the heart of it – she is tied to time.

Related, Temporals have the power to (temporarily) control people’s minds, the way Shady did. (Except Lee’s immune!) The time machine has now been destroyed, but Carrie has demonstrated an ability to time travel without it. Again related, Glen indicated that Carrie has the power to bring others along on the time trips she takes. (Alas, not Chartreuse?) There is a “temporal gun” that Linquist apparently invented for shutting down someone like Carrie.

Plot loose ends? I don’t think there are many, in that a reader potentially has enough information to extrapolate the situation however they like. Does Carrie succeed? Do the relationships come together? Does Linquist return? Well, hey, what do you want to happen? I feel like Julie and that note is the only element really dangling out there as “the author’s up to something”. (Am I wrong?)

With that said, there IS a lot we’ll be revisiting in Book 4: Julie’s note. Mindylenopia’s location. Carrie-Chartreuse as a relationship. Megan running the high school. Linquist’s language. Even Carrie’s mother, from way back in Book 1. ALL of which can be read about without prior knowledge, so PLEASE encourage some other readers to join in, maybe??

Do you think I missed anything in my analysis? Was there something you particularly enjoyed, or hated, about Book 3? Are you EXCITED for what’s to come? (Are you out there?)

Remember you can VOTE for T&T at “Top Web Fiction” on a weekly basis. I consistently seem to be hovering at 2 or 3 votes, so thanks for that.

Coming This Tuesday: BOOK 4 Begins. Note to self, post the index tomorrow.