“Time & Tied” PARTS 39 & 40
1. Original Date Of Completion: APR 4, 2002
2. What I Was Doing: Teaching ESL Math & Science
3. Changes of note:
-The Luci-Clarke conversation in the hospital was a bit different.
-Lee’s scene originally ended Part 39; I rebalanced for length on each part, meaning the group conversation was added there too.
-Changed seventeen year trip to sixteen. I’m so bad with ages.
-See below for a tidbit about “Star Trek”.

“Time & Tied” PARTS 41 & 42
1. Original Date Of Completion: MAY 11, 2002
2. What I Was Doing: Teaching ESL Math & Science
3. Changes of note:
-Luci’s letter. Never clued in that I was sending the guys. Once I realized in later edits, I couldn’t go back on the geometry rules.
-Tim used to be skipping class to tell the girls about the police; their lunch periods were staggered, like when I was in high school. So going to the library was new.
-All of Shady’s bits. His original dialogue wandered more, despite him also being more forthcoming.

Reminder: These past six parts were completed right after the “Pilot” (which became Parts 25 & 26 to lead off Book 2 here). So we’re back on track, and yes, somehow I was writing this during my first year of (private school) teaching – though you might notice it’s going slower. In only 6 parts we’ve leapt from December 2001 into May 2002.

Speaking of things going slow, interest in this whole website is abysmal – I did a stats roundup of all my blogs on January 1st. This website (where I posted more than once weekly) is doing WORSE than my personal home pages where I didn’t update at ALL in 2015. Ouch. Incidentally, T&T Part 42 was actually post #100 here. Yay?

The hardest part about serial writing seems to be that, no matter how much your writing improves over time, everyone starts at the beginning, when you sucked, and stops there, because it sucks. Back in September 2015, I thought my only chance for more views was to launch Book 2 right away. But no one wanted to read from “the middle”. What little data I have shows they STILL started at the beginning… and stopped. I’d redo Part One, except this thing has been edited to hell and back – I simply can’t rewrite the start AGAIN.

So I try not to be bitter. It’s hard. If I had to do this story over again (say, for publication), I’d pace it all very differently. How? No clue! (Do you see a way?) However, only NOW do you know how the time machine locates on Earth, only NOW are Lee and the Venitis in a key role, only NOW has Shady finally revealed the majority of the plot (assuming you believe him!)… after over 40 parts. And almost no one gets past Part 3!

Thank goodness I restarted personified math (as a webcomic) in August. I’ve always been slightly more passionate about it, and it keeps me going. Granted, I’ve had a couple comments here from John Golden, and that was nice. Finally, one person seems to be tracking slowly through the archives (real easy to spot with low stats), so okay. Sorry for the ramble, let’s actually look at what’s behind the story now.

WHAT’S IN A NAME II

“Time & Tied” as a title finally makes sense! (I hope.) You may not recall this, but way back in Commentary 3, I remarked on how the story used to be called “Time Trippers” (for the double meaning of ‘trip’). Then when I went to put this tale online a decade later (i.e., last year), that title had been taken. Hence the “time and tide wait for no man” play on words with how Carrie is “tied” to time. Okay, assuming you believe Shady – you might not want to do that. He doesn’t play nicely with others.

As to the origin of some other character names – the school principal, Dell Hunt, comes from Scott Delahunt, who read this story back in 2001 and has offered me commentary on it. (And he still reblogs the whole thing for me on Facebook!) “Jeeves” is generic for butlers, and I don’t recall why my chem teacher is “Fisk”, but the music teacher “Mrs. Willis” is a rewrite of Mrs. Wallace, who was my music teacher all through high school. (This is name only, infer no personalities.)

Then there’s Lee’s family, who we finally saw… and their last name is “King”. You think the name Chartreuse Vermilion is bad? Check out Lee’s family again. You won’t see me use first and last names back-to-back, because it spoils the joke – but those poor kids. Hopefully their father leaving isn’t connected to their names. Maybe he was pushing for a normal one.

Regarding episode titles, the one for Part 38, “Coming Together” was meant to be the theme for all of Season One – that is, all episodes from Part 1 going forward to Part 46. Using it as an episode title was deliberate. The planned theme for all of Season Two (the next set) would then be “Powering Up”. Yes, Season Two: Everything you’ve seen so far is, in a small way, a setup of the larger universe. See the spoiler section below for my remarks on Shady’s “war”. 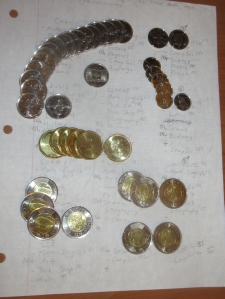 That sheet is where I roughed out character course schedules.

And speaking of their universe, I actually did photocopy an atlas and draw all the lines and everything that Frank and Luci do in part 37 – that scan there was the original. (It’s how I decided where Julie was born, rather than the reverse.) Also, Frank’s chalkboard sketch of the town? I have those town landmarks mapped out. One occasional reader compared my story to “hard” sci-fi, in terms of realism. I’m not sure I’d go that far, my research isn’t so in depth, but I do try to make their world believable.

In line with that, I spent the year 2015 keeping all the current year coins that crossed my path. I posted my last update about that back in November, when I had 20 coins. Here is the final tally for 2015: 2 nickels, 6 dimes, 19 quarters (including a specialty one), 6 loonies, and 9 toonies (including 3 special ‘veteran’ ones and 2 special ‘John A Macdonald’ ones). That’s 42! The ultimate answer. More possible time trips than I thought; granted, many of those coins came to me in December. (So far in 2016 I’ve only had a single 2015 dime.)

One last fun tidbit: Remember in Part 40, when Laurie speaks of Chartreuse predicting “the revival of the Star Trek franchise despite the lacklustre interest in ‘Enterprise’”? The ORIGINAL line when I wrote this back in 2002 referred to the decision to launch ‘Enterprise’ (which ran from 2001-2005) despite the lacklustre interest in ‘Voyager’! Now, of course, since they’re forecasting a new Trek series in 2017, only a minor tweak was necessary. And hey, I’ll take any chance to sneak in a Scott Bakula reference.

Spoilers for Book 1 may also creep in, as some elements are unavoidable.

Character-wise: We see Lee’s family, as I mentioned above, and get a clearer picture of his role in all this. He had the machine, he’s immune to Shady’s charms, and there’s one other trait we’ll see when he reaches his breaking point. We also saw more of Laurie and Corry Veniti, hopefully in a way that was natural enough. Of note, Laurie is an artist, and she’s gradually becoming more self-assured, even as Corry insists on protecting her.

Tim’s father now has a law firm, because I realized there had to be a time message from somewhen for this to work, and Tim’s family was the least developed. Luci’s “saw it on TV” letter reference at the time is a call back to “Quantum Leap”, season four (and more Scott Bakula). Speaking of Luci, she also got a bit more screen time here, in terms of revealing some insecurities. In her own way, she’s as accustomed to being in control as Corry or Julie, and right now control eludes her.

Amusingly, it’s the two people with the LEAST screen time right now – Carrie and Julie – who are at the centre of everything! Of course, it means they’ll be that much more prominent in the final arc of this book. And then there’s the new/returning character, “Shady”. He seems to be driving the plot…

Plot-wise: So, how much DO you believe Shady? For the moment, let’s grant him his “future war”, which is apparently not against robots. That old adage of “History is written by the victors” takes on an additional possible meaning here, in that the victors could literally be those who rewrite history. Then is it possible that “the victors” is whichever group has Carrie on their side? Or did you prefer Luci’s “guinea pig” version of events?

The two time travel theories from Part 10 are also at war here – parallel time tracks (Shady can change the past?) versus self consistency (Julie was always fated to die?). As you can see, I twisted Julie’s prophecy. SOMEONE was always fated to die… not necessarily Julie. She was never mentioned by name. But if I’ve adopted “twisted” self consistency, what of Shady awakening Carrie’s power early? While it all makes sense in my head, please point out logical flaws or plot holes if you see any. As “Cesium Comics” points out, time travel is confusing.

This last arc of upcoming episodes will be shorter. My original season was 22 episodes, meaning 44 parts, but I split the Books at Episode *12* (Part 24), as that made more narrative sense. Meaning only 10 episodes for Book 2 – but putting “The Pilot” back in gives us 11. So there are only 4 Parts left… possibly five, as Episode 22 (The Finale) is a bit longer than the others, and I’m tempted to split off an “Epilogue” as Part 47. Do you think that’s a good idea?

Parts 37/38 were originally called “Coming Together”, so “Geography and Geometry” was added. Parts 39/40 were originally called “Reparations” (both on the machine and on relationships), so I added “Recovery Mode” (also a play on recovering the machine, and recovering from recent events). And Parts 41/42 were called “Rescue Efforts”, so I added “Tied in Naughts” (what with the “Tied” to destiny thing).