Mason watched as Para looked uncertainly back and forth between him and Alison. “I… could show you what I’ve discovered here?” the blonde proposed.

“Yes, let’s do that,” Alison asserted. Mason decided to say nothing, merely gesturing that Para could precede them to the computer bank section of the room. After all, despite offering to take them to the coordinates, he wasn’t in a rush to leave. He simply wanted to deal with the situation in a way which would minimize his interaction with the locals, since he considered his role as a Time Lord to be that of an observer, not a meddler. At least, that’s how he felt about it lately.

Para – the one with the bunny ears hairband – led the two of them back to the wall of computer displays. “You see, after finding the note on the table about the numerals, I investigated here,“ she stated. “This display was running, and as you can see it wants us to input coordinates. That graphic below, implies the system is tied into that ring on the floor, which must be some sort of teleporting device. And I presume these watches sitting on the shelf here with the similar symbol would keep us safe for the trip.”

She stood back with a tentative smile. Alison glared at the five watches, slid that gaze to Para, then turned her full attention to the monitors, poking at them to see if they were touch screens. As such, Alison didn’t notice Para’s shoulders slump, and the blonde biting down lightly on her lower lip. Which is when Mason realized something.

She seemed to be becoming increasingly distressed by the way Alison was reacting to her, and her mannerisms suggested to him that she believed that SHE was the problem, rather than the situation they found themselves in. More to the point, Para seemed to be looking to Alison for nonverbal cues that she could mimic, as if she was trying to figure out how to fit in – and she either wasn’t finding those cues, or wasn’t able to duplicate them. Was Para actually a rabbit of some sort then? Or an artificial life form, designed to make them feel more at home here?

Regardless, being a Time Lord himself, Mason knew a little something about looking the same on the outside, yet being different inside. He moved up next to the blonde, as Alison continued her technological playing around.

“I have two hearts,” he remarked quietly, attempting nonchalance but rather hoping to get a reaction. “Beating inside my chest.” He was rewarded with a wide-eyed look. “Embrace who you are,” he continued with a smile. “Humans aren’t terrible role models – for the most part, anyway – but don’t feel you have to become one of them to fit in.”

“But I’m not popular! I’m personified math!” the blonde blurted back. Her cheeks gained a touch more colour at the admission.

Mason lifted an eyebrow, wondering as to his best response. He elected to go with, “I’m a Time Lord, nice to meet you.”

Para smiled tentatively once again, then glanced uncertainly down at her hand and back up to him. Mason reached out to take the hand. “Time Lords can also shake hands,” he assured her, doing so. Her tentative smile became one of relief.

“Okay! Here we go,” Alison remarked, now typing on some sort of virtual keyboard. “NOW we’ll find out what’s really going on!” She grinned a bit evilly. “I feel like I rolled high on this attempt, so to speak.”

Mason looked over as the display flashed briefly, and then changed from awaiting coordinate inputs to what looked like a graphic of a rotating wheel, with the central hub area in indicated in red. Mason nodded… a central hub, so signing “The Hub” at the bottom of that letter made some sense. “Okay, we’re on some sort of SPACE station,” Alison realized, her finger idly tracing through the air to mimic the spinning motion seen on the display. She looked down and began to type again. “But we’re not in orbit around a planet. We don’t even seem to be in normal space…”

The virtual keyboard vanished from beneath Alison’s fingers, and the video screen went blue. The brunette looked back up as the voice of a woman came from a set of nearby speakers. “Okay! Hacking, that’s a little rude,” the voice said. “If you need more information than what was outlined in the letter, ask politely.”

“What? Who are you?!” Alison demanded, seemingly looking around for a microphone to speak into.

“I’m… ooh, hm. Let’s call me Alice,” the voice answered her. “But rest assured that such a name does NOT relate to the Umbrella Corporation. Nor is the name “The Hub” referencing some splinter group off Agents of SHIELD. The Epsilon Project is it’s own little group. Don’t panic, as they say!”

“You realize saying that to someone like me will have the complete opposite effect?” Alison challenged. “Now, why have we been brought here??”

A pause. “You want context, is that it? Okay. Check out this image.” A picture flashed up on the monitor, replacing the blue screen. Mason took a step closer to get a better look. It seemed to picture two people in Western clothing standing on either side of a clock face. He reached into his inside suit pocket as the disembodied voice of Alice continued with, “Back to the Future. I forget if it exists in your realities, but this was our first sign of a serious Roman Numeral issue. You see the problem?” 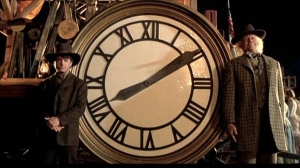 Mason didn’t, actually. A glance at Para showed no immediate recognition either, whereas Alison simply seemed ever more agitated. So Mason finished pulling Bardiche out of his pocket – which was how he referred to his portable device. Granted, it resembled what humans called a “swiss army knife” more than it did a long poleaxe, but Mason figured a poleaxe might one day become one of the options available. Tapping at a couple buttons, a small camera extended from Bardiche’s interior mechanism. Mason used it to take a quick picture of the image on the monitor.

“I’m hoping your silence is agreement,” Alice continued. “Of course, too late to deal with that incident, those movies are now one six hour long saga. BUT our plan is to send you somewhere a bit more conspicuous, higher chance of success… though we’re not quite sure how it will all play out. Hence the limited data. Understand now?”

“No one is going ANYWHERE until you explain how I ended up here in the first place!” Alison challenged.

Another pause. “Okay, look, I can be down there in under ten minutes.” There was a click, as if the line had been shut off, and the display reverted back to the coordinate input screen.

Alison immediately spun to face Mason. “You said you could navigate us away on a TARDY or something? Let’s do that. Now.”

Para blinked. “But now someone’s coming! And you said no one was going–”

Alison turned back to the blonde. “I lied. Or maybe I’m lying now. They’re obviously listening to everything we say! We have to get out of here, it’s not safe to even talk!”

Mason stroked his beard, as he realized something else. “Alison, by any chance do you have mild paranoia as a character trait?”

She turned back to him. “By any chance do you have ‘show off elite psychoanalysis skills’ as your own trait? Now are we leaving or not??”

Mason repocketed his Bardiche, doing so with deliberate care to allow him a moment to contemplate Alison’s request. All things being equal, he would prefer to wait for that Alice to explain more. But things were not quite equal. After all, if he were to be transported via “The Hub”, he would likely be separated from his TARDIS, which was something he would prefer to avoid. Besides, he was interested in the reactions the two women would have upon seeing it.

“I’m still willing to check out the co-ordinates under my own power,” he decided. “Get in my taxi. Use the driver’s side door.”

Alison immediately marched over to the vehicle. Para remained standing near the computer banks, looking torn, glancing from Alison towards the watches they were leaving behind. “But… oh…” She wrung her hands.

“Sometimes being human means not doing what you’re told,” Mason remarked to her. “That said, you’re welcome to stay here and give our regrets.”

“Nngh…” The bunny girl did a cute little dance from one foot to the other. When Mason turned to go though, she quickly dashed ahead of him. “Following all the rules leaves a completed checklist,” Para said breathlessly. “Following your heart achieves a completed you! Ray Davis. Inspirational quote I picked up somewhere.”

“If you say so,” Mason chuckled. He followed – but was forced to pause at the TARDIS door, as both Alison and Para now stood in the way, gaping. Para was the first to move inside, allowing Mason to follow and look back at Alison’s expression. He was pleased to see that instead of the usual suspicion or annoyance, her expression had morphed into one of surprise – perhaps even admiration.

Mason took a moment to admire the control room for his ship too – he supposed it had become rather commonplace to him. This despite it being only moderately smaller than the room they had just exited, albeit in the shape of a pentagon. The door leading inside faced one of the five corners, the one which had two exits on either side, leading deeper into the ship. The wall design followed an irregular pentagonal tiling pattern, and the central control console was also five sided; some work by Mason had eliminated the need for a sixth operative.

“This is not a normal taxi,” Alison managed after a moment.

“Mmm… larger on the inside,” Para agreed. “Extra dimension involved?”

“In a way. Time And Relative Dimension In Space. TARDIS,” Mason answered, now grinning broadly. “Close the door, please, Alison. Para, you have those coordinates?”

The blonde nodded, ceasing her own look around to hand him the letter. Mason began to throw some switches to input the information, and after Alison shut the door, he pulled down on the largest lever on the main console.

The lighting in the room changed from standard yellow to green as the ship departed. Mason then turned his attention towards fine tuning the route they were taking. Which is when there was a lurch, throwing all the occupants off balance. It was followed by a larger one. Mason looked to his stabilizer – it seemed to be functioning. So why the rough ride?

“Is that supposed to happen?” Para questioned, grabbing for a convenient railing next to him on the central console.

“Not exactly,” Mason admitted. “But come to think, I ran into this turbulence on the way into that Hub place too. Ah!” He snapped his fingers. “That’s probably what knocked out my chameleon circuit, reverted the TARDIS back into taxi form.” He smiled again, pleased at having made the deduction, only to have the biggest lurch of them all throw Alison down onto the floor.

“Seriously?” the brunette shouted. “And you only mention the problem now??” Which was when the lighting in the room switched from green to emergency red. “Mason,” Alison continued with an edge on her voice, “do you have any idea what you’re making me feel like doing?”